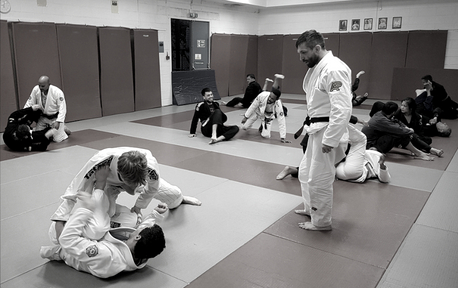 Rolling back attacks from the US of A

Having personally travelled to Virginia several years ago to train at Fifty/50 BJJ, where Seph was teaching at the time, I had already experienced the slick techniques he is known for, so I was thrilled Seph could visit our academy as part of his two week UK seminar tour.

On the night of the seminar itself, Seph had promised to cover half guard and reverse de la riva, two closely linked positions in BJJ that are vital additions to any fully rounded game. As the session began, Seph wasted no time in making sure everyone quickly got to grips with the basic principles of a strong bottom half guard position. While lying on their side, the bottom player creates a ‘frame’ with their arms and legs, using their top knee as a shield against their opponent’s chest, stopping them imposing pressure from the top. The initial warm up consisted of the bottom player maintaining this position while the top tries to break down the barrier and flatten them out. After the exercise, Seph dove straight in to his first fancy half guard attack: a deft arm drag into to a rolling back attack. He showed two options of taking the back, both by cradling your opponent’s hips to roll into the ‘truck position’, where you have the choice of attacking leg locks or hunting your opponent’s neck.

Following the rolling back attack fun, Seph demonstrated an equally crafty back take from half guard that he aptly calls the ‘Jedi Mind Trick’. This time as your opponent tries to force a guard pass, you block their approach which encourages them to step backwards to the other side of your body in order to pass your legs, but alas, just as they do you effortlessly guide them into your trap to once again finish in control of their back.

In the final act of the captivating seminar, Seph moved on to display another succession of back attacks in the event of your opponent standing up in your half guard. With a seamless switch to the reverse de la riva position, you spin between their legs and hook your feet behind their knees to force them to sit to the ground while you immediately glue yourself to their back.

With two hours of tasty techniques already in the bank and the clock ticking away, the seasoned black belt didn’t want to leave without squeezing in a quick Q&A. He broke down some of the finer details of manipulating your opponent’s base while maintaining half guard, and then to finish he once again mesmerised with a wizardly waiter sweep back take that left the room wishing the seminar wouldn’t end.