The BJJ rites of passage 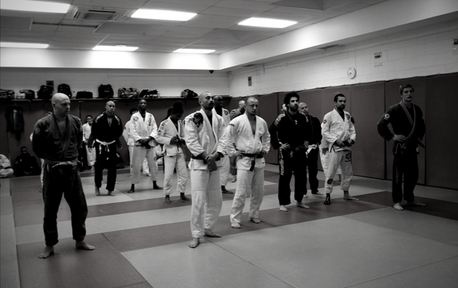 If you’re reading this and you’re new to Brazilian Jiu Jitsu, congratulations, you’ve already taken your first step toward becoming a fully fledged gi-wearing grappler. The fact that you’ve stumbled across this blog, or more likely that it’s stumbled across your feed, means that you probably have an interest in BJJ, or you may have even tried it. In which case, you’re one of us. Now that we’ve established you’re part of a relatively rare bread of human being who likes the idea of dragging someone to the ground in order to inflict permanently pacifying choke holds and joint locks on them, then there are some things you may want to know before embarking on the long, painful, punishing – yet ultimately rewarding – journey that is training jiu jitsu:

If you’re not used to drawn-out periods of close bodily contact that can be just as awkward as they are aggressive, you soon will be. You can’t train jiu jitsu without getting to grips with getting a grip. From the very first minute on the mats you will be asked to hold, grab, push, pull or squeeze a body part of someone you’ve literally just met. Clamping your hand around someone’s wrist; cupping your palm around the back of their neck; stuffing someone’s entire head under your armpit – you’ll have to do it all. And the better you get, the more you’ll embrace it. After a while, all that groping and grappling will become so natural that trying to render someone unconscious before even knowing their name will just be another Wednesday night.

Many of us seasoned BJJ players tend to seriously underestimate just how foreign the language is that we use. Both on and off the mats we use a plethora of obscure names and phrases to describe any number of the peculiar positions we find ourselves in. Armbar, rear naked, Omaplata, Kimura: these words mean absolutely nothing to 99.9% of people, yet we jiu jitsu-heads use them like they’re in the Oxford dictionary. So, all you need to do is survive your first few weeks of having to guess what on earth your instructor means by ‘pummel for the underhook’ or ‘force the half guard’, and soon enough you’ll be using BJJ-lingo like it’s your mother tongue.

I train, therefore I am

If you thought drugs and alcohol were addictive, think again. As so many grappling converts like to attest, jiu jitsu is more than a martial art; it’s a lifestyle (#bjjlifestyle). First you’ll be taking the occasional beginners class, with plenty of days in between sessions to wash and dry your only gi. You’ll still eat and drink everything you know you shouldn’t and only think about jiu jitsu when you go to class – which is only when your friend is going too. So far, so cute. But give it a few months of slow but sure improvement and maybe even a cherished stripe or two on your belt, and before you know it you’ll be hooked harder than a fat kid on sugar. You’ll have ten gis on rotation with another two on order while you struggle to decide which online BJJ technique library to subscribe to this month. Going for a single or double will no longer refer to refer to how many scoops of ice cream you want, but how you plan to slam someone into the ground before tapping them out. You’ll be wearing jiu jitsu-branded apparel out and about and hoping somebody notices while you struggle to remember the names of your friends who you don’t regularly see on the mats. But, as incurable, life-absorbing addictions go, you could do a whole lot worse. Jiu Jistu empowers and equips us in far more ways than we realise, but that’s for another blog entirely.