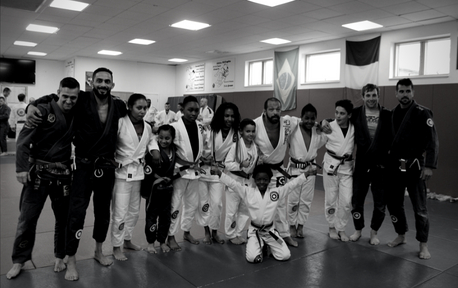 Back in late April, New School BJJ welcomed the return of one of the true originals of jiu jitsu: 5th degree black belt and affiliated academy authority, Helio Soneca. Only in town for a few days, it was the perfect opportunity to combine a seminar with the academy’s annual grading. Like a fun-filled festival that rolls around once a year, Soneca arrived with his unique brand of colourful comedy and animated displays of impeccable technique that have come to be expected from a visit. Split over two days, the BJJ hall of famer kicked off proceedings by demonstrating a set of fundamental positions that could compliment the game of any level of jiu jistu practitioner. To start he addressed the importance of the traditional closed guard – a key but increasingly under-utilised position in the modern BJJ game. He began by stressing how critical it is to keep your opponent’s posture broken at all times while setting up attacks from the bottom. To accomplish this he shared some simple yet ingenious tips on securing a lead deep collar grip and maintaining hip mobility. A simple yet effective cross collar choke led the demonstration of attacks, followed by a swift counter armbar and finally a crafty brabo-style choke if all else fails – a seamless chain of submissions built from that all-important initial collar grip.

Interjecting with the odd amusing anecdote or entertaining aside, for just over two hours Soneca kept up an impressive pace of technique demonstrations, each position naturally flowing into another. Following his series of attacks from the closed guard, he transitioned swiftly to de la riva guard. With another offering of posture-compromising and balance-controlling tricks to employ when securing the de la riva, he then showed a final few attacks to close the show. First came a stealthy tripod sweep that will steal your opponent’s heels from under them before they’ve even thought about passing, then with a quick switch of foot placement came another sweep into a berimbolo to effortlessly take your floundering opponent’s back – a sequence any modern game medal-chaser would be proud of.

It may have only been a flying visit, but once again the legendary instructor left us with a plethora of positions to practice throughout the following weeks.