What’s in a blue belt?

Enduring the wait for a blue belt promotion is one of Brazilian Jiu Jitsu’s greatest challenges, but could it be over sooner than you think?

It’s the same old predicament of training BJJ: you never know when you’re going to get graded. Unlike most, if not all, other martial arts which have a structured grading syllabus and timeline, the wait for a new belt in BJJ is painfully long, literally, and none more so than the blue belt. In judo a white belt represents someone fresh off the street; no experience, no skills, clueless. As soon as he or she can prove they won’t headbutt the floor during a forward break fall and can put together a half decent hip throw, they can take a test for a new belt, and then another three months later. But in BJJ, three months is nothing. The only thing that would’ve changed colour is your skin from all the bruises you’re regularly taking home. Your belt is still white, probably without a single stripe, and you’re still as vulnerable as a newborn when your instructor shouts, “free sparring”.

The vast majority of people who take up BJJ and tie a white belt around their waist, will never wear one of another colour – fact. The learning curve is simply too steep for most and the rewards (of which are plentiful) take too long to discover. Too tough and too technical, most people won’t see their second week, let alone their second year. But, for those who do, for those who have committed, those who keep turning up, keep learning, keep getting tapped, keep trying to describe to their family and friends why they’re still a white belt after a full year of training. For those, their biggest test yet is just around the corner: the blue belt.

It’s often said that a blue belt in BJJ is the equivalent of a black belt in many other martial arts. It can take a year (or sometimes less under exceptional circumstances, but hey, we’re not all Travis Stevens), or it can take three years or even longer. Some academies do have a clear curriculum to complete for their blue belt grading, but for the vast majority there is no formula. Ongoing assessment under regular training is the usual approach, which works if well managed and monitored, but it can also leave huge margins for delays and neglect. The most frustrating thing for a long-serving white belt is the not knowing. They may be able to see the horizon, but for the life of them they can’t tell how far away it is.

So, if you are a three or four stripe white belt and you know you’re steadily improving, you’re holding your own against some tough players and your tap outs per round rate is slowly reducing, here are a few questions to help figure whether that blue belt is so close you can almost touch it, or so far off it’s just a blur:

How often are you training?

Are you training barely once a week, or are you getting regular sessions in across multiple days? If you’re training two or three times per week, then you’re making yourself hard to ignore, which is key. Your instructors will be able to see steady improvements in your skills and most of your training partners will notice that you’re on the mat every time they are.

Who’s asking you to roll?

Are higher grades regularly picking you for a roll or are you always left out to shrimp in the corner? If it’s the latter, you may have other problems, but if it’s the former, you’ve been broken in and don’t even know it. You’re no longer an unpredictable, flailing-limbed beginner who pinches skin and foams at the mouth while rolling. You’re now a capable grappler who is technical and coordinated enough to be regarded as a safe sparring partner who’s a bit of a challenge. Perfect.

Are you spotting others’ mistakes?

You still make mistakes, obviously. But do you spot when others are screwing up and you know what they should have done instead? Good, but don’t go over and tell them straight after they’ve tapped to someone, but do make a mental note not to make the same mistake yourself. The fewer fundamental mistakes you make, the sooner you’ll be invited to that not-so-secret blue belt whatsapp group.

Are you escaping from anything or simply surviving?

You’ll no doubt still be getting dominated by higher belts on the regular – it’s only natural at this stage – but just how you’re being beaten up is a telling sign of your level. If you’re forever finding yourself drowning in a tsunami of attacks with no resistance or defence at all, you’ve got a lot to work on. But, if you’re starting to successfully defend your position and make your opponents sweat for their submissions, you’re finally getting somewhere. Better yet, if you’re remaining calm in bad positions and managing to pull off the odd miraculous technical escape from the jaws of defeat, then you could well be due an upgrade.

What’s in your arsenal?

At this point, nobody expects you to have a carefully curated style of rolling with an array of signature submissions, but you should be starting to develop your own ‘game’ by now, even if it’s just gravitating towards the techniques you’re comfortable with. If you’ve got a few sweeps and submissions from various positions that you can smoothly transition between without too much thought and effort, you’re on the right track. If you’re still drawing blanks every time you try to progress, your blue belt may be further off than you think.

How’s your breathing while you roll?

This is a great indicator of if you’re straining while sparring or starting to properly relax. If you feel that you can roll for extended periods of time without breathing heavily and you’re no longer holding your breath and going red while executing a technique, then the chances are you’re finally relaxing while you fight, which is an absolute must for any soon-to-be blue belt. 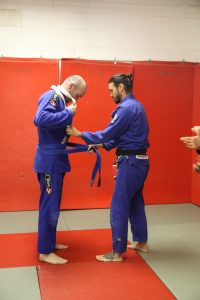